Since I was a child I was always interested in graphic arts, creative arts and music, so, when I began to get interested to the art of lutherie in the summer 2005, after completing my studies in informatic science, I thought this was the perfect job that encloses all my passions.
At that time I was inspired by my guitar hero Brian May, the guitarist of Queen.
Like him I wanted to build from scratch a guitar and learning to play it, so I decided to build the legendary “Red Special”, the guitar he built with his father in 1963 and that still plays during his tours .
To make a long story short, after many attempts I completed my first guitar in September 2008, just some days before to go in Milan to see my first Queen gig with paul Rodgers as singer.
That was the beginning of my love for lutherie and how it became my job after some years of experience and practice. 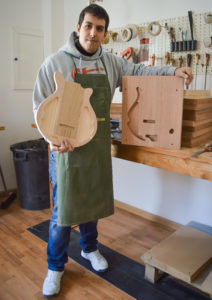 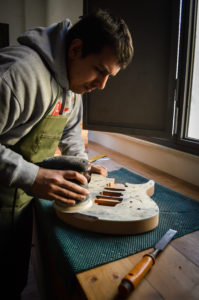 I founded the CQuadro Guitar Works in February 2012, when I felt ready to put the experience I accumulated in the previous years at the service of real customers.
At that time I put a lot of passion on the building processes and research of the right materials  to make a faithful replica of the Red Special, I really loved it and it became soon my battle horse and the guitar that made me known worldwide.
Anyway, I never wanted to be a RS builder, I always wanted to be a guitar builder.
I like to draw my models, I enjoy to experiment new materials and I love to bring in the real life the ideas I have in my mind.
So, in October 2016, after a long meditation, I decided to change my company name from “CQuadro Guitar Works” to “Carpinteri Guitars”, the first step to start a new vision of my job and a new look for my future customers.
In January 2018 I reached the goal of 100 guitars made.

After many years of guitar building I understood what is worthy and what is not for the idea of lutherie I have in my mind.
I think that the guitar is a tool, it’s the working tool of the guitarist, therefore it must be mainly easy to use, comfortable and reliable.
The common factor that connects these three features is simplicity.
A simple guitar is easy to use in live situations, it’s comfortable because every superfluous detail is omitted, and it’s more reliable because if less factors are involved, less issues the guitar could have in future.
Good tone and sustain are automatically reached if the whole construction is made impeccably, and to obtain this I use technology.
Electric guitars are precision tools, therefore I think precision tools are needed to make them.
I use a CNC machine to make very precise work after I draw my guitars on my PC.
In my opinion technology is not an enemy for an artistic job like this, it’s a really great helper for modern luthiers. 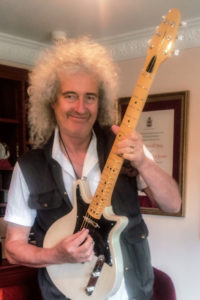 In December 2012 I sent an email to Brian May saying him it should be an honour for me to build a guitar for him.
To the email I attached also a picture of the guitar how it was once finished.
The guitar was a fusion between his Red Special and a Telecaster, I thought it should be nice to play songs like “Crazy little thing called love” with it.
He answered after three days with my great amazement saying he liked it and, as a real gentleman, he wanted to paid it.
I refused because the guitar was an omage from me to demonstrate my gratitude for the person who was the main inspiration of my job.
Brian received the guitar in August 2013 and sent me a picture of him with the guitar in his arms.
That was one of the most beautiful days of my life.